Ambassadors at FSS: The Czech Republic and Finland have a lot in common, says the diplomat

The ninth ambassador who visited the Faculty of Social Studies this semester is Jukka Pesola. Last week, he gave a lecture to the students of the Department of International Relations and European Studies as a part of the course How do they see us? The Czech Republic and its European partners and talked with them about the Finnish-Czech relations and the current political situation in Europe. “I am happy when I have the chance to talk with young people. To get to know what they think, which topics and problems they deal with,” said the diplomat.

At first, Finland and the Czech Republic can seem like very different countries. In your opinion, what are our similarities?

We share plenty of similarities, which is also why it was so easy for me to come to Prague. The mentality of our nations is alike, for example, we have the same sense of humor. Our countries are economically liberal – that is why we cooperate so closely in the context of the trade policy of the European Union. Another topic that connects us is ice hockey. Both Finns and Czechs love the sport, and it occurs in almost every conversation I have with Czechs. We also have a lot to talk about in the areas of technology, artificial intelligence, and the question of digitalization.

How would you describe the Finnish-Czech relations?

I would only use one word – excellent. My job here in the Czech Republic is quite easy in this sense. The Czech ministries, authorities and organizations are very helpful. The exchange of information and our mutual cooperation poses no issues whatsoever.

You have been the ambassador to the Czech Republic for more than three years now, what questions have you dealt with so far as an ambassador?

The Czech Republic and Finland are members of the European Union, so at the embassy we observe and follow Czech debates, plans and views on individual European topics. For example, during discussions about climate change, I try to keep up with what your plans are in this area. At the same time, my task is to show you the Finnish point of view. Another important topic is also mutual trade, and now, of course, the situation in Ukraine.

Has the war in Ukraine disrupted your ordinary schedule?

Sadly, quite a lot. But I think that is the case everywhere right now. My task is to follow what the Czech authorities are doing, how they are assessing the situation, and also what they are willing to do and what they want to do within the European context.

What do you think about the steps the Czech Republic has taken so far in connection with the war?

The Czech Republic is one of the most active countries if we are talking about supporting Ukraine. It surely has a lot to do with your historical experience. Many people I have talked to about the war mentioned the Prague Spring in 1968. Thanks to your past, you can understand the current situation of Ukrainians better. The Czech Republic has also stated that it is in favor of Ukraine’s possible future membership in the European Union. All the help you provide to Ukraine and the refugees coming to the Czech Republic also cannot be left unmentioned.

The war in Ukraine triggered a deep change in Finnish thinking

Finland and Russia are bordering countries. With Russia being the aggressor in the current conflict, are you worried that the war could spread to your country?

I would not say that we are scared, but we surely are concerned. We have been living next to Russia for centuries, we have a shared history. At times it was better, at times it was worse. The war in Ukraine triggered a deep change in Finnish thinking.

What do you mean by that?

For example, before the war, only 25% of Finns were in favor of entering the North Atlantic Alliance. According to the last public opinion polls, approximately 62% of respondents were in favor. The Parliament should soon start the debate about changing our security environment and one of the variants just might be the membership in the alliance.

Jukka Pesola is a diplomat who has been the Finnish ambassador to the Czech Republic and Slovakia since 2018. He visited the Faculty of Social Studies last week and gave the students of International Relations a lecture as a part of the course How do they see us? The Czech Republic and its European partners.

How do they see us? The Czech Republic and its European Partners

The course How do they see us? The Czech Republic and its European partners is now taught at the Department of International Relations and European Studies for the second time. Ambassadors of European countries to the Czech Republic take part in the lectures. The aim of the course is to provide the students with an insight into the practice of international diplomacy in an interactive and original way. Therefore, students have the unique opportunity to meet the representatives of different countries in person and actively participate in discussions. The students of English programs can also sign up for the course. This semester, thirteen European ambassadors accepted the invitation.

How do they see us? The Czech Republic and its European partners 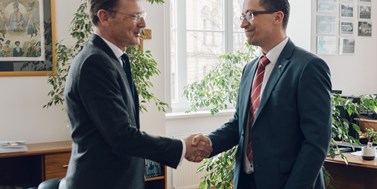